Timehop reminded me the other day that it has already been 5 years since the London Olympic games,
which reminded me that my last post on this blog was about the Olympic games, albeit a few years after the event;
which in turn made me wonder why I stopped writing.


I guess I got a bit too busy, trying to finish a thesis whilst looking for a new job wasn't easy.


Then I got a new job, but the thesis wasn't finished...


Then I didn't particularly like my new job, but I had to finish the thesis...


Then I finished the thesis, and submitted.


Then I got a new job, a real job I enjoyed, and


Then I was happily busy!


There are plenty of gaps to fill in, and I might get the opportunity to write about these last 3 years. But I might not. I guess we'll have to take this a post at a time and see how it goes!


One thing is for certain though.. I definitely feel more like an engineer rather than a physicist these days!

I have been editing this text for a couple of years now, it's not my best writing, and it misses a lot of details, but it is a short account of my experiences as a Games Maker in London 2012.

My journey as a Games Maker began in October 2010, when I completed the application for volunteering at the Olympic games. A bit unsure about having all the skills necessary, but determined to apply, to give myself a chance of being part of this huge celebration of sport. 9 months later I was invited for an interview at the EXCEL Centre London, where I was asked to say why I wanted to be part of this, and what skills and experiences I could offer. Around Christmas 2011 I was informed that I was going to be a Sport Operations team member. I remember feeling proud and excited. I didn’t know what the Sports Operations team’s objectives were, and what I was going to be doing, but I was going to be part of the games and that’s what mattered to me! 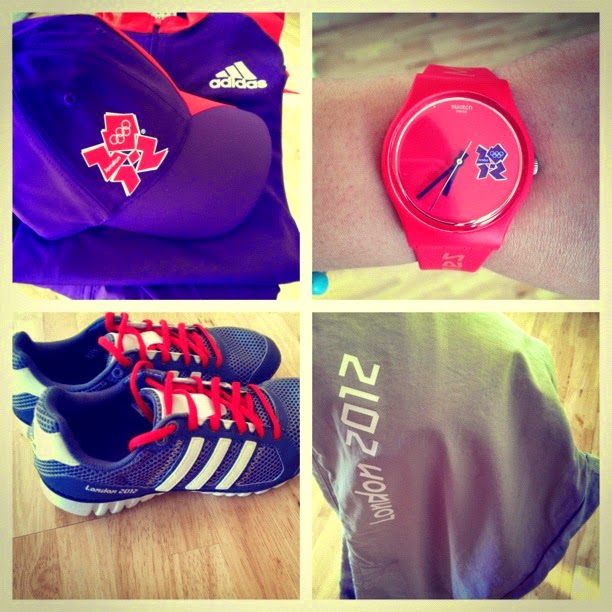 My first shift at the Olympic Village was in July 2012. It was the most surreal experience ever! Walking in a village where flags from all over the world were hanging from the balconies, athletes were training; bands were playing the Olympic Anthem, and people like me, volunteers were taking pictures in front of the Olympic circles. 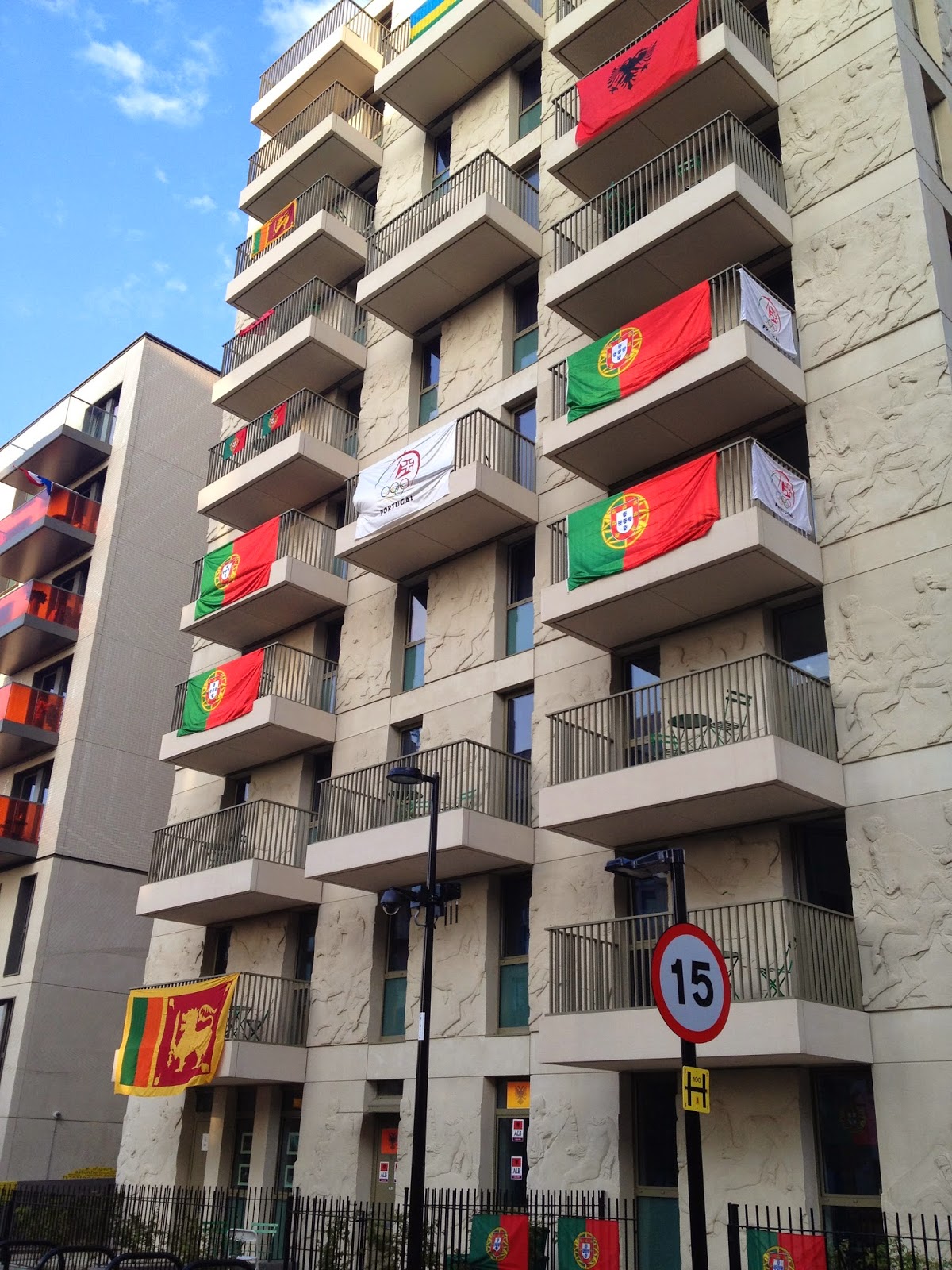 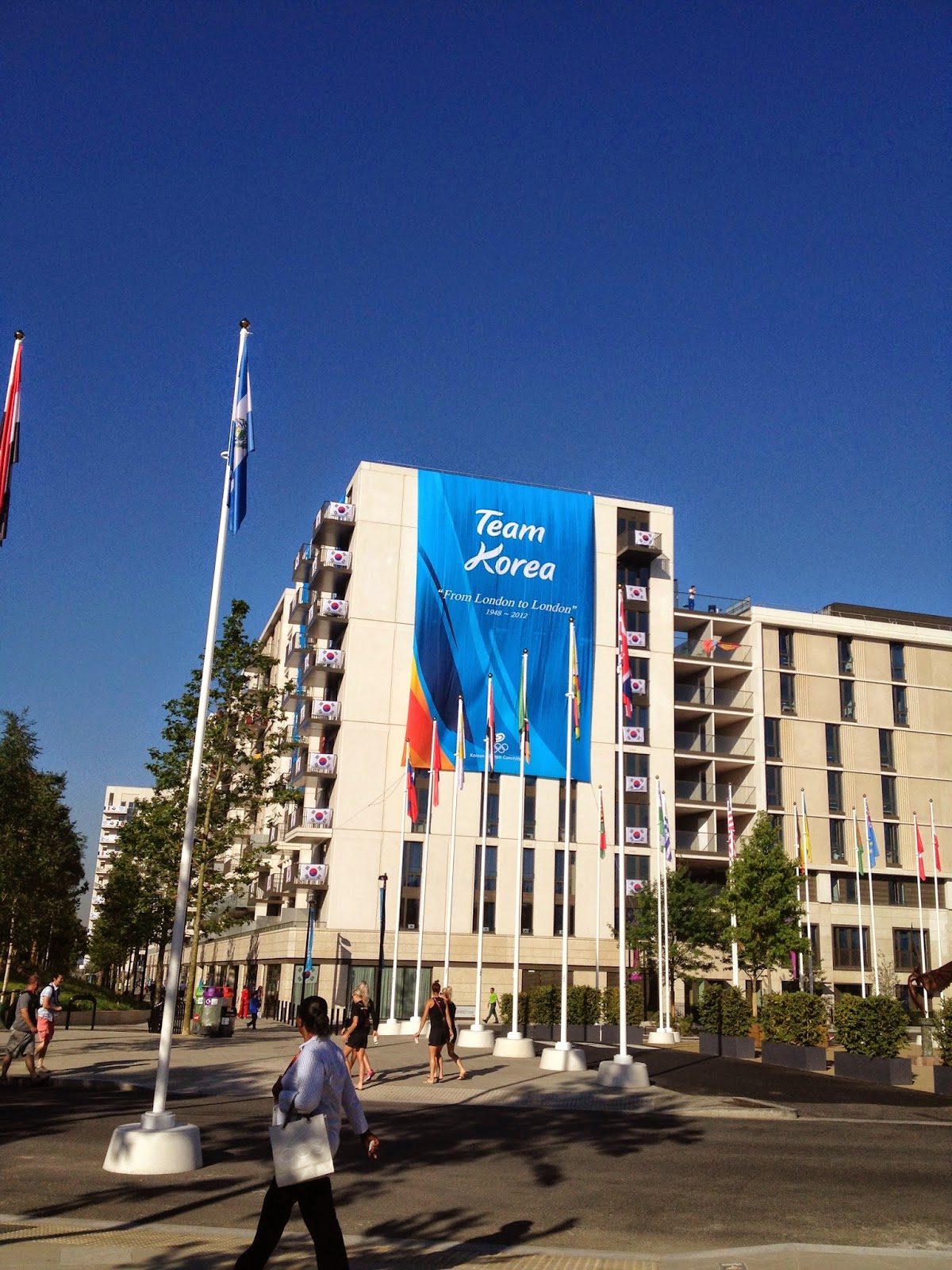 My job there was ‘simple’. Our team (Sport Viewing Room Team, or SVR) was responsible for recording all 40 feeds for television broadcast on DVDs, according to the time each one started/ finished. The athletes/ coaches/ sport officials could then request a copy of their game. They had the option of taking the DVD and watching it on their own laptops, or using one of the viewing rooms we had available for booking. 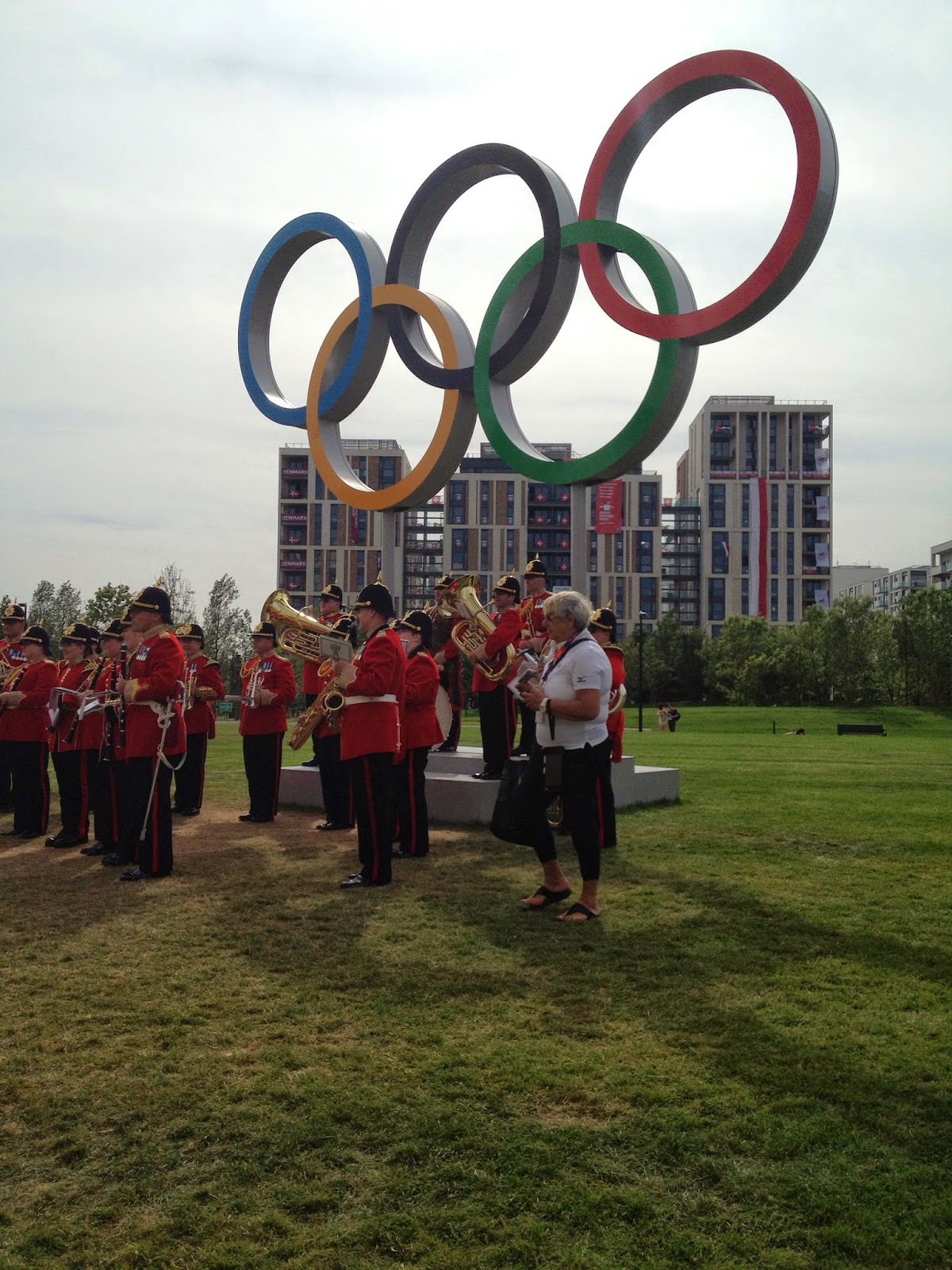 Starting at 7am we were programming all 40 DVD recorders to record the day’s schedule, inserting the correctly labelled DVD in each one. At 8am our reception was opening for people requesting or collecting DVDs. At the same time our duplicators were working in full speed copying the DVDs from the previous day.

I met some amazing people during my time as a Games Maker (Hello Sarah, Kayleigh, James, Sheri and the rest of the team). My fellow games makers were all exceptional and supportive. Our manager, Mark, and the two team-leaders (Holly and Ru) were incredible, providing support and guidance when needed, showing true team spirit, allowing us to work our own routine, and letting our personalities shine through. Even random people on the street/ tube were great to us. For the first time people in London would smile to me on public transport, and even chat to me! They would usually say ‘Goodmorning! Were are you off today?’, they would ask questions about the Games, and my role as a games maker. It was amazing what the Games did to Londoners!

Three weeks after my first shift was the closing ceremony of the games. I have to admit that tears were running down my face as Jacques Rogge was saying thank you to all the volunteers. It had been a tiring three weeks, but exciting non the less, and I was so proud I was a part of the games!

I still remember my last shift. It was the day after the closing ceremony, and as it was my last day I arrived early to have time to enjoy the Olympic park atmosphere once more, taking pictures and just walking amongst the Olympians. I reached the SVR offices at 6.30am, expecting to see Mark there as always. Mark was nowhere to be found, the offices were locked, and Sarah and I just sat on the steps wondering what was going on. Typical us, we started making up theories in our head, Mark had been really apprehensive in the beginning of the games, not showing a lot of trust to the rest of us, but he was becoming better lately. We thought that he is testing us, that he was giving us one last test before we all finished, making sure that we knew how to do our jobs properly. By 7.30 neither Mark, Ru or Holly had arrived, we knew they had tickets for the closing ceremony, but that didn’t finish very late, and they were always the first ones to arrive anyway!

The athletes/coaches/sport officials would be arriving soon, to request their DVDs but we hadn’t even started copying yet, if I remember correctly. Keyleigh and James were the ones who went to the security team downstairs and asked them to unlock our offices for us, as the leadership team wasn’t there with the keys. After some negotiation they let us in through the outside door, but they did not have keys for the inside door, where the archive and empty DVDs were kept. We had to make this as we went along, so we got the copied DVDs out, and decided to give them out until one of them showed up. 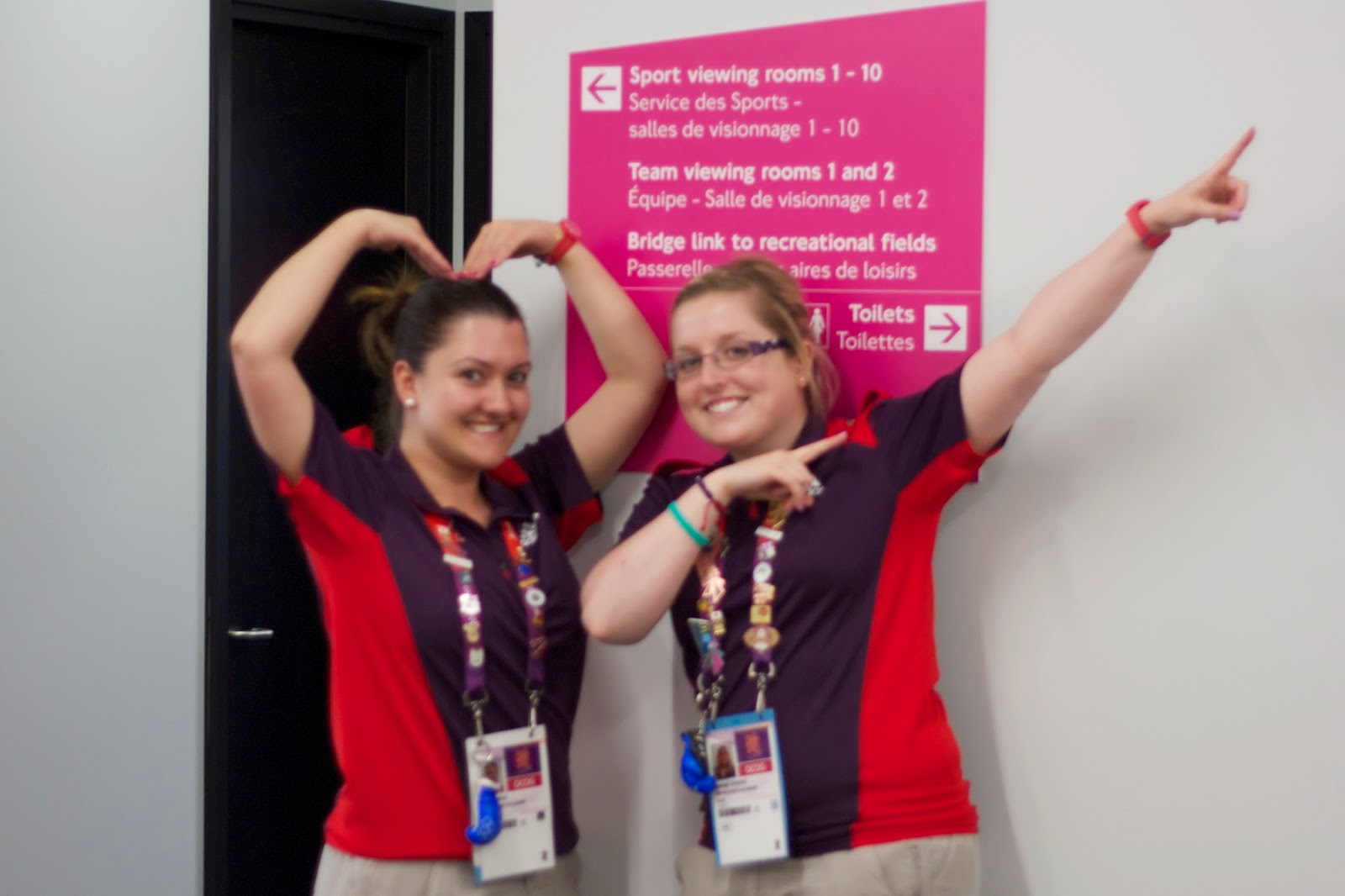 Holly and Mark arrived at 9 and 9.30 am respectively, both looking pretty hangover. Of course it wasn’t a plan to check whether we could do our jobs, they were both drunk, and both trusted each other to show up and decided to have a lie in for the last shift!

Mark was so lovely that day, he allowed us to have copies of the games we wanted, and gave us all a little gift to remember our time together. I remember the excitement when someone won a medal, the concern when some had an accident, the anxiousness during the final moments of a still undecided game, the gratefulness people showed to us, the pride we felt when we were able to help, the spring in my step every morning and evening, despite the tiredness and the standing up all day. It was all worth it, I will just never forget those three weeks. 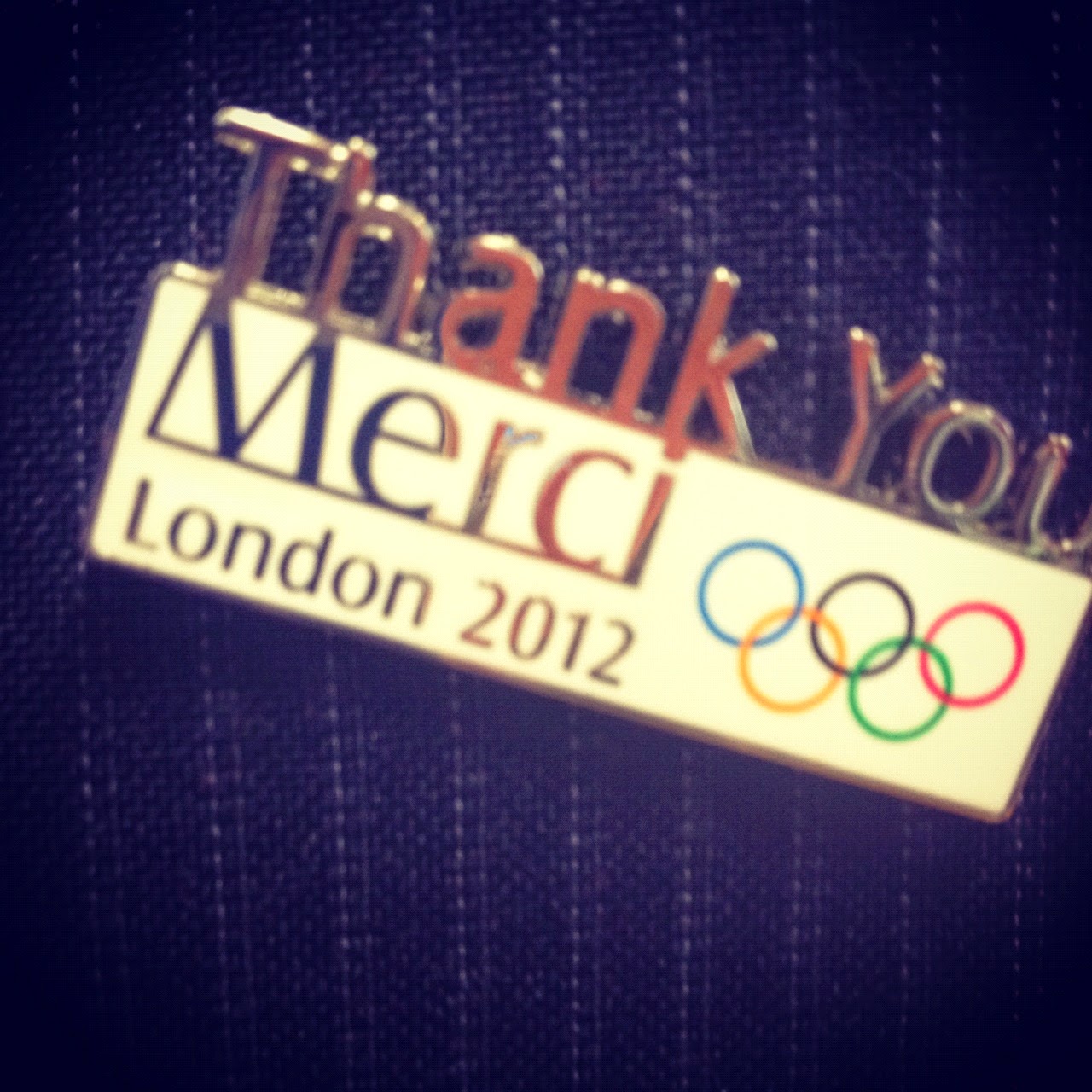 Officially I have less than four months to go until the end of the funding for my Doctorate.

I am therefore entering a combination phase, where I will be writing and finishing off some parts of my research. Thus I need to get in a writing mood, and hence why I've decided to make a re-appearance on this blog!

A lot of things have changed since my last couple of posts, I haven't decided yet if I want to go back and fill in the blanks, or focus on the current day and time, but I will make it up as I go along.

Blogging has helped me in the past to write down my ideas, and I am hoping that it will help me get in a writing mood again, even if that is in the form of a 'productive' procrastination.


I have to admit that I feel more like an engineer than like a scientist lately, and I am hoping to explore this change through this page.

If you are reading this, please encourage further posts by asking any questions :)

I know I owe you a post about my olympics experience, I am working on it..!


In the meantime, I've decided to take part in a blogger Secret Santa game.

I've chosen a few different small gifts for this blogger, and I think every one will bring you closer to his/her identity.


Let me start my present giving with the gift of knowledge; using my previous experience with water simulations, I want to introduce you dear blogger to the concept of wetting!  Wetting in general terms, is the way the water droplets behave according to the relationship they have with the material they are resting on. Water is 'happy' to stay longer on water absorbent surfaces, but it will run off quicker from water repellent surfaces.

I wont try to explain the science of bonds, there are better scientists-bloggers out there to explain it all; you can click here for more information. I am not sure if prasinada has explained this in one of her previous science for all posts as well.

Now I have not done an excessive search, but I think these will be prove to be the most helpful apps for you my dear blogger in your new career. Hopefully they will get you off the ground with sketching, and you wont need to get your hands dirty with pencils and sketching boards!

My next gift is 2 for 1. I have specifically chosen this map for you, which shows the real location of all underground stations, and not their 'printed' location. This will help you when walking around london, as you will be able to judge whether stations are actually in walking distance or not. Combined together with this treasure hunt, they will help you find your lost love for London. I've been on this treasure hunt myself, and I have to tell you that it's worth the £15. I've seen/noticed things in London I didn't even know existed!

My last, but not least present to you dear, is this: Hopefully you can explain it's use to the rest of my readers. It took me some time to find a vintage version; this one was actually sold about a year ago, otherwise I would have bought it!


I hope you have a lovely time in Cyprus,
Merry Christmas and a Happy New Year to you and your loved ones :)

How many times can you hit rock bottom in a year?

I am trying to avoid a count of all the times I felt pretty lousy in the past year and move on with my first post in almost a year.

Yes I have been down lately and that's why I have not been writing. I am trying to climb upwards though, so hopefully, you will be hearing from me soon..!

I am planning some posts around my Olympics Games Maker experience, and my involvement in a new professional group, called the CIBSE Young Energy Performance Group (YEPG).